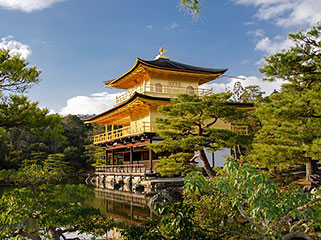 Kinkakuji Temple (Golden Pavilion)
The famous Golden Pavilion (Kinkaku)--actually a pagoda made to house the sacred relics of the Buddha--has given this temple the popular name of Kinkaku-ji ("Temple of the Golden Pavilion"), however the official name of this branch temple of the Rinzai-sect Zen temple of Shokoku-ji is Rokuon-ji. The temple was designated as a UNESCO World Heritage Site in 1994. 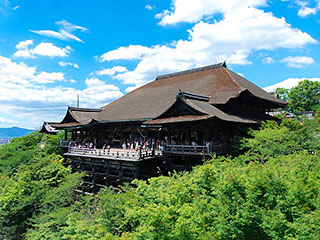 Kiyomizu Temple
Halfway up Mt. Otowa, one of the peaks in Kyoto's Higashiyama mountain range, stands Kiyomizu-dera Temple, which is abundantly blessed with nature. It provides landscapes to match each season, including cherry blossoms in spring, lush green in summer, colored leaves in autumn, and snowscapes in winter. Otowa-san Kiyomizu-dera Temple was founded in 778. Its history dates back over 1250 years. As a holy place where the deity Kannon's great compassion prevails, the temple has long been open to citizens of all classes. 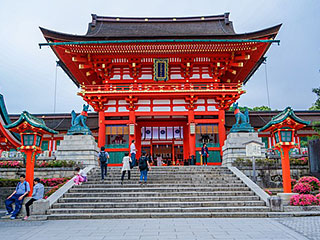 Fushimi Inari
The origin of Fushimi Inari Taisha is described in Yamashirokoku Fudoki, an ancient report on provincial culture, geography and oral tradition that was presented to the emperor. Irogu no Hatanokimi, an ancestor of Hatanonakatsue no Imiki, is said to have shot a rice cake, which turned into a swan and flew away. Eventually the swan landed on a peak of a mountain, where an auspicious omen occurred and rice grew. Inari is named for this miracle ("ina" is Japanese for "rice"). 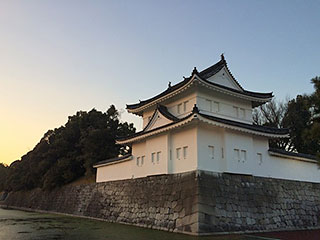 Nijo Castle
Known as the Kyoto residence of the famous leader Tokugawa Ieyasu (the first shogun of the Edo Period), Nijō Castle is a stronghold that represents the prestige and power of the mighty leader known as the unifier of Japan. Construction on the castle was begun in 1601 and finished 25 years later by Ieyasu's grandson Iemitsu. In 1939, the castle was donated to the city of Kyoto and was officially opened to the public. Enjoy exploring and learning about Ieyasu's dramatic and interesting life - no one said history had to be boring! With hundreds of varieties of flora as well, Nijō-jō is also a great place to view some of Japan's treasured seasonal beauty. 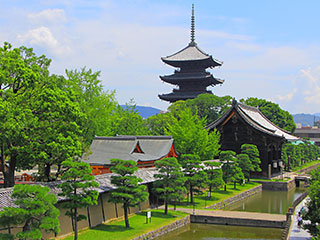 Toji Temple
In 794, the capital of Japan was transferred from Nara to present-day Kyoto. With the arrival of the imperial court, the city was renamed "The Imperial City of Heiankyo" (the former name of the city of Kyoto). From the entrance of Heiankyo, an 84-meter-wide avenue ran directly north to the Imperial Palace, in the middle of the city. The city was arranged symmetrically on either side of this grand avenue and all streets ran precisely north-south and east-west in a grid pattern. The layout of old Heiankyo is still visible in the rectilinear pattern of modern Kyoto's streets. Two huge guardian temples were built on the east and the west sides of the main entrance of the Imperial City of Heiankyo. Unfortunately, the temple on the west side no longer exists, but To-ji, which literally means "East Temple", has survived to the present day. 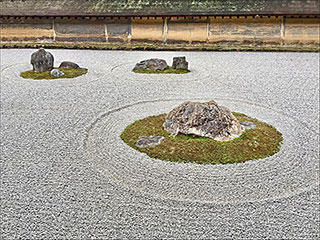 Ryoanji Temple
The Ryōan-ji garden is considered one of the finest surviving examples of kare-sansui ("dry landscape"),[1] a refined type of Japanese Zen temple garden design generally featuring distinctive larger rock formations arranged amidst a sweep of smooth pebbles (small, carefully selected polished river rocks) raked into linear patterns that facilitate meditation. The temple and its gardens are listed as one of the Historic Monuments of Ancient Kyoto, and as a UNESCO World Heritage Site. 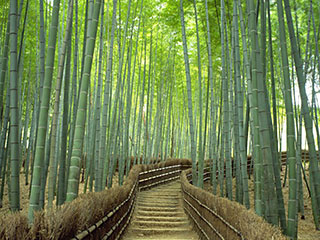 Arashiyama
Arashiyama (㞩山, Storm Mountain) is a district on the western outskirts of Kyoto, Japan. It also refers to the mountain across the Ōi River, which forms a backdrop to the district. Arashiyama is a nationally designated Historic Site and Place of Scenic Beauty.

Arashiyama (㞩山) is a pleasant, touristy district in the western outskirts of Kyoto. The area has been a popular destination since the Heian Period (794-1185), when nobles would enjoy its natural setting. Arashiyama is particularly popular during the cherry blossom and fall color seasons. 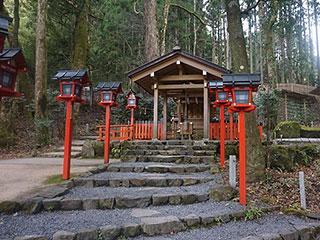 Kurama/Kibune
Kibune and Kurama are two small valley towns that are nestled at either side of Mount Kurama in northern Kyoto and are connected by a five-kilometer forested trail around the mountain that is popular with tourists; taking around two and a half to three hours to complete at a leisurely pace. 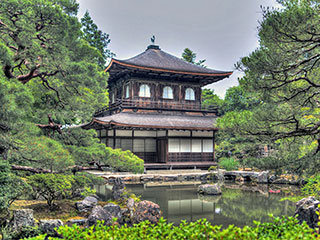 Ginkaku (Silver Pavilion)
Ginkaku-ji (Silver Pavilion) was so named in the Edo Period in contrast with Kinkaku-ji (Gold Pavilion). Ashikaga Yoshimasa, the 8th shogun of the Muromachi shogunate, originally built Ginkaku-ji as the Higashiyama-den palace. After Yoshimasa passed away, the palace became a Zen Rinzai School temple named after Yoshimasa's posthumous Buddhist name of "Jisho-in." 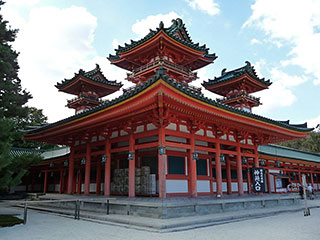 Heian Shrine
Heian Jingu Shrine celebrates the legacy of the ancient capital of Kyoto with ornate architecture and beautiful gardens open to the public. The shrine is a 5:8 scale replica of one of the innermost parts of Heiankyo, the imperial capital of Japan for more than one thousand years. Discover Heiankyo and the rich cultural heritage of Kyoto while exploring Heian Jingu and its landscape gardens. 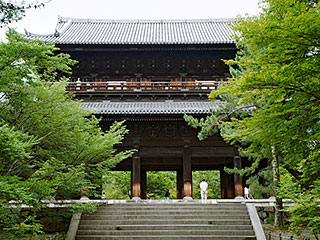 Nanzenji Temple
Nanzenji Temple (南禅寺), whose spacious grounds are located at the base of Kyoto's forested Higashiyama mountains, is one of the most important Zen temples in all of Japan. It is the head temple of one of the schools within the Rinzai sect of Japanese Zen Buddhism and includes multiple subtemples, that make the already large complex of temple buildings even larger. 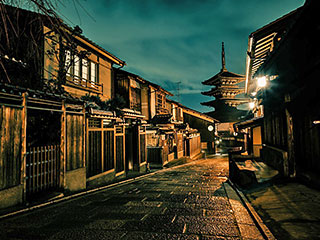 Gion
Gion is a traditional entertainment district lying north and south of Shijo Street, and stretching from the Kamo-gawa River in the west, as far as Yasaka-jinja Shrine in the east. Originally, this shrine was called Gion Shrine, and the entertainment area developed here to service its many pilgrims with food and drink. Later, as kabuki drama became popular on the Gion district's western edges, more sophisticated forms of entertainment were developed for the theater-goers, and so today Gion is known as Kyoto's most famous geisha district. Packed with bars, restaurants and traditional teahouses, Gion is at its most atmospheric in the early evening, when the lanterns are lit and apprentice geisha will flit about the back streets on their way to their appointments. 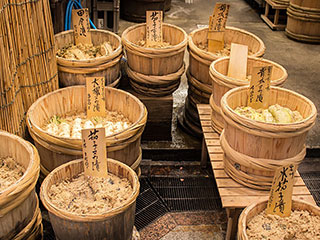 Nishiki
Nishiki Market today is very different from its origins as an open-air fish market some 400 years ago. Nishiki Market has an astonishing 130 vendors packed into a narrow passageway that is approximately 400 meters long and 3.9 meters wide. It continues to thrive, attracting not only visitors, but Kyoto locals too. 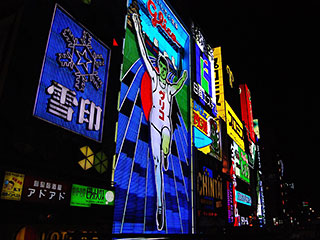 Minami, Osaka
Minami is Osaka's shopping, dining and nightlife center is the largest commercial area in Osaka. One of the city's two downtowns. It's a world of neon lights, colorful people and some of the best food on earth. All manner of shops and entertainment can be found in the Minami Area, which stretches from Semba (Honmachi) to the area surrounding Namba station. In Minami, locals and tourists alike can enjoy the city atmosphere of Osaka.

Todaiji Temple, Nara
The origins of Tōdai-ji lie in a temple called Kinshō-ji which was founded in 728 for the repose of the spirit of Crown Prince Motoi, son of Emperor Shōmu (r. 724-749). In 741 when the Emperor issued his edict ordering the construction of a national system of monasteries (Kinkōmyō-ji) known as the Kokubun-ji, Kinshō-ji was elevated in status. In 743 Emperor Shōmu issued his proclamation for the erection of a Great Buddha Image and when the capital was returned to Heijō (Nara) construction of the colossal image of Vairocana was begun on the grounds of the Kinkōmyō-ji and was completed in 749. Construction of the Great Buddha Hall took place concurrently and the image was dedicated in 752 with a lavish consecration ceremony. Subsequently the Office for the Construction of Tōdai-ji supervised the building of the West and East Pagodas, the Lecture Hall and Monks' Quarters to complete the temple complex. 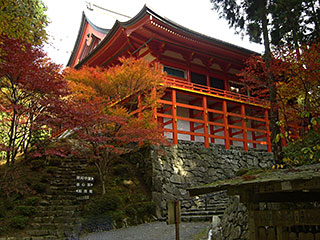 Hieizan Enryakuji Temple, Shiga
Hieizan Enryakuji Temple, with its sprawling grounds across Mt. Hieizan, is the head temple of the Tendai Sect, and was registered as a World Cultural Heritage site in 1994 and as a Japan Heritage site in 2015. Conveniently located for access by driveway, cable car and all bus routes, it is comparatively easy to make it all the way to the top of the mountain. At Enryakuji Kaikan you can also experience what it's like to train at the temple, including Zen meditation and making copies of the sutras.